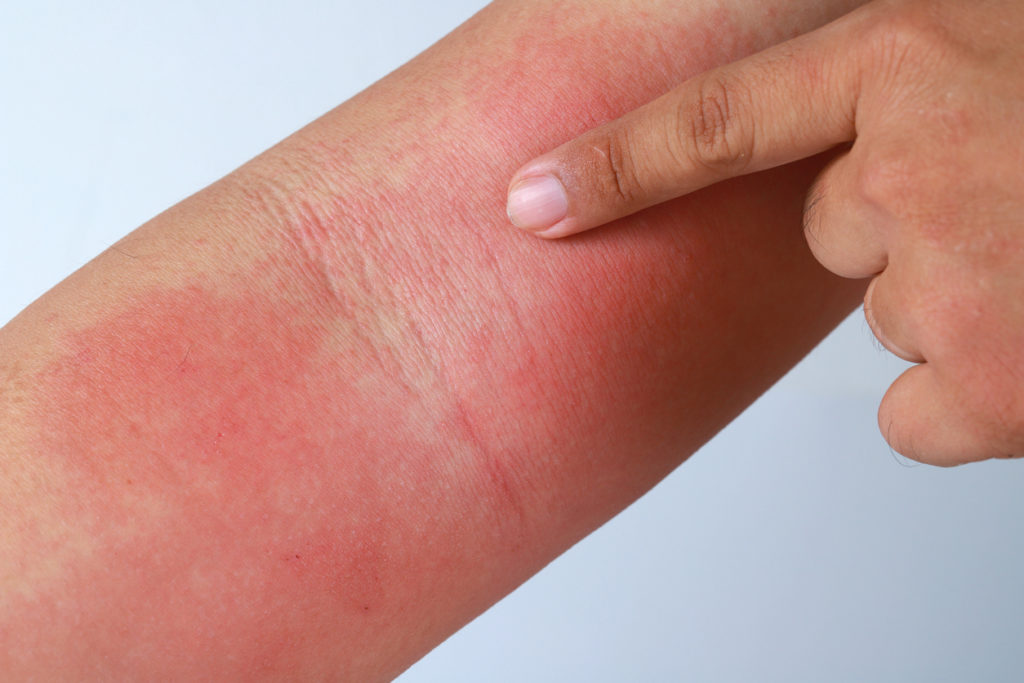 Dermatitis and eczema are interchangeable terms for several conditions that cause inflammation of the skin. The most common of these conditions are listed below. Each has a different cause but similar symptoms – red areas of skin, raised red lumps, and/or blisters that sometimes join to form patches. In severe cases, the areas may become infected. In long standing cases of dermatitis, the skin becomes dry, thick, and scaling.

Atopic Dermatitis, or atopic eczema, is often called the “itch that rashes”. The rash causes an itch; the itch promotes scratching, and scratching leads to further irritation and increased rash, and so on in a continuous cycle. If you have this form of eczema, it is likely that a family member has some type of allergy such as asthma or hay fever or a food allergy.

The rash changes with age. It is common in infancy, when it appears as inflamed, weeping patches or crusty areas on the face, neck, and groin. In childhood and adolescence, the rash is found mainly in the folds of the skin. Atopic dermatitis generally goes away by itself. In adults, it usually becomes limited to one area of the body, such as the hands.

Contact Dermatitis arises after contact with a substance that either irritates the skin or, less commonly, causes an allergic reaction. In both cases, depending on how long the skin has been in contact with the substance, the skin is itchy and may swell or become marked by blisters. The pattern of the rash corresponds directly to the area exposed to the irritant. Causes of contact dermatitis include laundry detergents, metal from jewelry or clothes fasteners, some rubber products such as gloves and condoms, some cosmetics, plants (such as poison ivy, and some drugs. The reaction almost always occurs 1 or 2 days after exposure.

Stasis Dermatitis occurs on the lower extremities –calves, ankles, and feet – in people who have varicose veins, chronic swelling of the feet, or circulatory problems. Symptoms include mild redness and swelling, as well as itching. As the disorder progresses, the affected area becomes redder. If the swelling is not treated, the rash may become crusted and leak fluid. Infection can occur, and injury to the area can lead to ulceration. Treatment of stasis dermatitis starts with wearing compression stockings.

Seborrheic Dermatitis is typified by scales over red patches, which most commonly appear on the scalp in the form of dandruff. However, it also affects the eyebrows, eyelids, ears, and the folds near the mouth and nose, causing flaky, red, burning, and itchy patches. Infants often get a form of seborrhea called cradle cap, which can persist for several months before going away on its own. The cause of this extremely common condition is not known.

Perioral Dermatitis is often confused with rosacea or acne. The small red papules and pustules are limited to the skin surrounding the mouth and, less commonly, can appear around the nose and under the eyes. It primarily affects young women and its cause is unknown. The dermatitis usually clears in 1 or 2 months with the use of antibiotics such as tetracycline, erythromycin, or minocycline. Antibiotic gels rubbed onto the dermatitis may also be effective.

Dermatitis is inflammation of the skin. As you get older, your skin becomes more vulnerable to irritation. Here are some recommendations for coping with dermatitis:

You can treat most kinds of dermatitis yourself. Hydrocortisone cream and skin moisturizers, available at any drugstore without a prescription, can cure many cases of contact dermatitis. Antihistamine tablets or capsules (such as chlorpheniramine or diphenhydramine), also available without a prescription, can relieve the itching but may also make you feel drowsy. Try to identify and avoid any substances that may be causing the irritation. Dandruff is best treated with a medicated shampoo. Apply the shampoo to your wet hair and rub it into all areas of the scalp with your fingers. Let it remain on your scalp for at least 2 minutes before rinsing your hair.

LASER BASED TREATMENT AT OUR FACILITY

We use a combination of photorejuvenation and medical grade products to successfully treat eczema at our facility. The details of the treatment vary depending upon the individual cases. It is best to schedule a consultation session to determine the most appropriate treatment course for your particular condition of eczema or dermatitis.